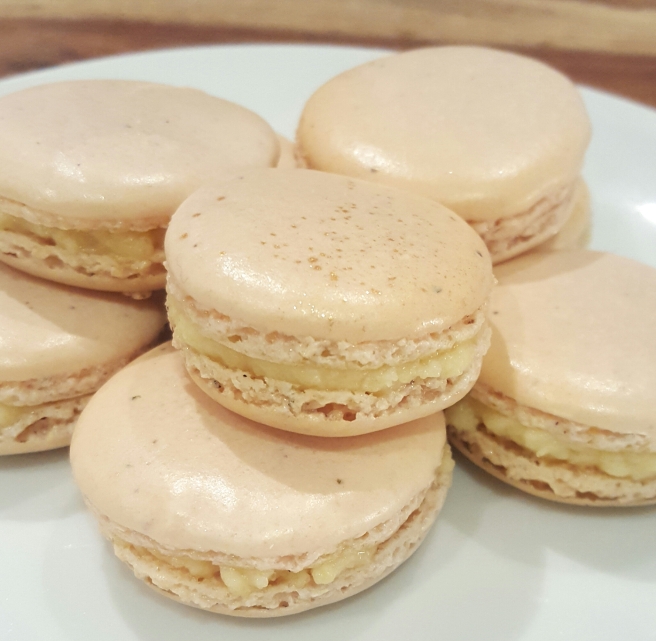 A few years ago I went through a bit of obsession with making macarons and it went something like this… first attempt: fail, second attempt: success, third attempt: fail… and so forth.  The flavour combos were right, I just struggled with getting a consistent result and so I put my obsession to bed and moved on to cakes.  Roll on 5 years later and I thought I should muster up the courage to try them for the blog… and low and behold I’ve got something that actually works.

Now, call me crazy… but back in my macaron craze of 2010 I decided to start using fruit tea bags to flavour my macaron shells. I know generally speaking the shells are just coloured but I really do think this adds an extra depth of flavour when paired with a good filling. I generally fold it in to the mix so the flavour disperses but you could also sprinkle a little on top before they go in the oven if you want to use it as a decoration.

Makes: 24 (more or less depending how big you pipe the mix!)

Line a baking sheet with baking paper and pre-heat the oven to 150°c or 130°c fan assisted. Using a handheld mixer whip your egg whites to soft peaks adding the caster sugar gradually until fully incorporated and your mix is smooth and glossy.  Add you food colouring gel and dried tea and mix again for a minute.  Add more gel than you think is required as once you add in the almonds/icing powder the colour will fade.

Blend your ground almonds with the icing sugar and then sift half the mix into your meringue mixture and fold gently with a metal spoon or silicon spatula. When fully incorporated sift in the remaining half of the almond mix and fold through. This is by far the hardest bit, you don’t want to under or over fold. Ideally you want the mixture to run off your spoon/ spatula slowly in a steady stream – it shouldn’t be blobby/break. Likewise you don’t want it overmixed and runny so keep an eye on it.

Place the mix in a piping bag and then pipe 2″ circles on your baking paper leaving a good 1″ each between them as they will spread a little.  Sprinkle a little of the edible gold dust over the macarons (or some of the dry tea).  When the sheet is full tap on the counter a couple times to get the air bubbles out and then leave for 20-30 mins to rest. This time allows the macarons to form a crust which is really important. Finally, bake for 10-13 minutes and then leave to cool.

Put the butter and white chocolate in a bain-marie over a saucepan of simmering water and gently melt, stirring until the mix is smooth and glossy. In a saucepan heat your whipping cream until it simmers and then add to the white chocolate, stirring vigorously. Finally add the mango puree and stir till full incorporated. Cover and leave in the fridge for at least an hour to set. Before using in the macarons take the set mix and beat with a handheld mixer for a few minutes. Then place in piping bag ready to use.

Luckily for me I still have some of my mothers home made jam so I just popped some of this in a piping bag, but you could make your own if you really want to!

Pipe a ring of mango ganache around the edge of one mango shell and then pipe a little of the strawberry jam in the centre. Top with another macaron shell.